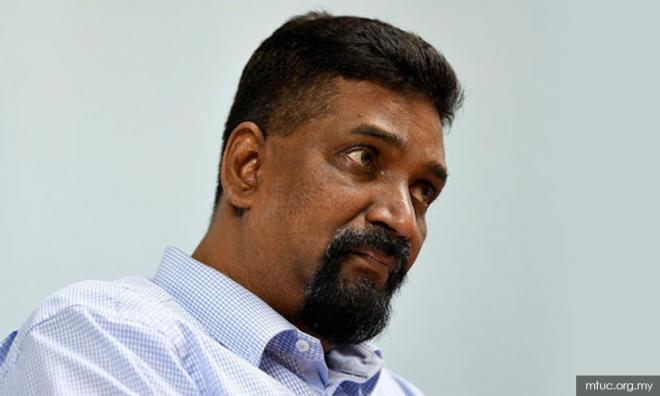 Malaysian Trade Union Congress (MTUC) secretary-general J Solomon has blasted Bank Negara following its announcement on the procedural change for the six-month moratorium for hire purchase (HP) and fixed-rate Islamic financing yesterday.
In FAQs issued today, the central bank denied it had reversed its decision on the six-months payment deferment for both loans.
"The payment deferment is still automatic for HP and fixed-rate Islamic financing," said BNM.
It said the latest change in procedure, which requires borrowers to "complete the documentation to give legal effect on the moratorium", is unavoidable.
Solomon (above) has interpreted the change as Bank Negara opening the door for banks to penalise borrowers who opt to settle deferred loan payments post-October.
"MTUC strongly urges Bank Negara to rescind the approval given to banks to levy interest on hire purchase customers who choose to settle the six-month moratorium on their loans after October."
He claimed that the approval goes against the government’s proclamations that it would do everything possible to lighten the financial burden of workers and the public who are suffering from the economic fallout of the Covid-19 pandemic.
"Bank Negara and the banks add insult to injury by stating that borrowers would not pay any interest if the deferred loan payments are settled in October, at the end of the moratorium period.
"How many people in the present day would have the means to do so, given the economic fallout and job retrenchments along with pay cuts that are taking place across the country?" he asked.
Solomon claimed it was an inhumane move by Bank Negara and the banks to further squeeze consumers in every way possible, without any regard for the welfare of the people.
Bank Negara's clarification did not make any mention of possible additional fees for deferring these two types of repayments.
An article by personal finance website Ringgitplus did, however, speculate that requiring borrowers to sign additional documentation opens the door for banks to charge additional interest.
Solomon urged Prime Minister Muhyiddin Yassin to summon the central bank governor and demand justification for giving this "grossly inappropriate approval for banks to commit nothing short of another daylight robbery on borrowers already at their wits' end."
He pointed out that as recently as March, Bank Negara had stated that Malaysia's banking system has sufficient liquidity to ease financial strains and support intermediation activities to contain the impact of the Covid-19 pandemic.
The move by Bank Negara also brought sharp criticism from former de facto law minister Azalina Othman Said who took a jab at Finance Minister Tengku Zafrul Tengku Abdul Aziz on Twitter saying: "This is (what happens) when the finance minister is not a people's representative but a representative of the bank?" - Mkini
Mohd. Kamal bin Abdullah at 7:59 PM