OK folks here is some good news for a change. Lets forget about politics for a while. Over the past 12 years or so there has been a quiet but now increasingly noticeable "Science Revolution" going on among Tamil schools in Malaysia.

At the primary school level, up to UPSR, the Tamil schools are scoring the highest grades for science and mathematics.   They are even beating the Chinese schools. They have left the sekolah kebangsaan behind. (Sekolah agama, sekolah pondok semua tak payah sebut lah ok.)

There are a few factors behind the success of the Tamil schools. One of them is that for the past eight years SRJKT Taman Tun Aminah has been participating in something known as the National Science Fair For Young Children (www.nsfyc.org).

The National Science Fair for Young Children is part of something else called ASTI or theAssociation of Science, Technology & Innovation (www.asti.org.my), a mucho grande NGO dedicated to the teaching of science in Tamil schools.

The Science Fairs have been run in the Tamil schools for close to 12 years now.

For the past three years ASTI also runs the Young Inventors Challenge or YIC involving all Malaysian secondary schools.   The YIC gets participants to design science based projects.

Without many other Malaysians noticing it, the Tamil school kids who have been participating in ASTI's Science Fairs and Young Inventors Challenge have also been winning a string of international science competitions and awards in recent years. Here is a short list.

1. In March 2015 the SRJK (Tamil)  Ramakrishna won 1st place at the Beijing Youth Science Fair. The young scientists were mentored by ASTI. 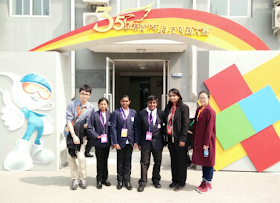 Above : SRJK(T) Ramakrishna at the Beijing Youth Science Fair 2015 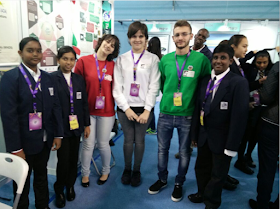 Among youngest in age group 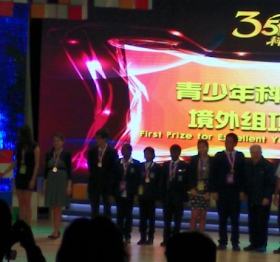 Walking away with First Prize in Beijing

2. In 2014 the SRJK (Tamil) Kulim won the Double Gold Award at the British Invention Show in London  (Energy Saving Machine Dispensing Drinks).  The 13-14 year old team members were the youngest participants in the competition. 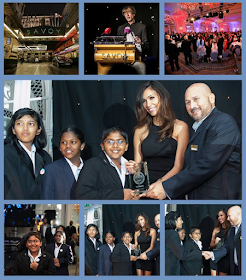 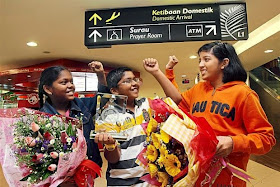 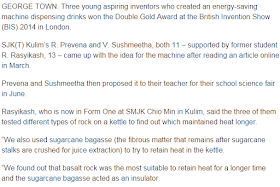 4. In 2012 graduates from the SRJK (Tamil) Kulim won the Genius Olympiad 2012 Project Fair On The Environment in New York, USA.  They were the youngest team participating, against entrants from 100 countries. All the team members were graduates of ASTI's National Science Fairs.

This year 93,000 Certificates of Patrticipation will be handed out.  300 Tamil schools submitted written reports on their participation in the Science Fairs.

On average every year about 400 Tamil schools participate in the Science Fairs hosted in their premises. 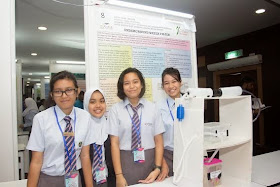 Above & Below  : Aspiring scientists at ASTI's  "Young Inventors Challenge" 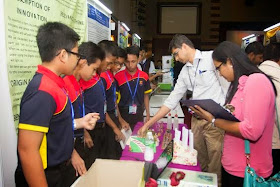 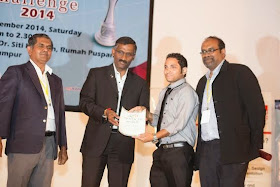 Above : Winner of ASTI Innovation in Community Award - Adham El Sharkawi from Cairo.

Below : 191 secondary schools applied to participate in YIC 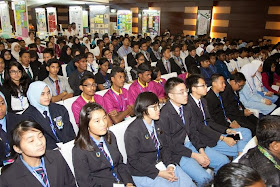 Lately the private international schools have also begun participating in the YICs.   The "School of Science and Technology", a private secondary school from Singapore has participated. The YIC expects more participants from foreign countries.

Three years ago when they began, 19 secondary schools applied to participate in the Young Inventors Challenge. After three years the number has increased to 191 secondary schools - an increase of 950%, with a total team membership of 900 young people.

However due to financial constraints the YIC was only able to shortlist 60 teams.

To keep all the Science Fairs going, ASTI trains about 700 teachers per year in scientific knowledge and scientific methodolgy (basically how to get the kids interested in science). Over the years they have trained over 7000 teachers.   Training can be day or weekend sessions usually held at school premises.

ASTI is also the Malaysian collaboration partner with Germany's Goethe Institute which runs the Science Film Fest around the world. This is a competition to produce documentaries and teaching films about science. Winning films become inputs into the Creative & Critical Thinking Camps.

Finally ASTI has also worked with ASTRO to produce 65 'science capsules' in Tamil which have been broadcast on ASTRO TV over the past seven years.

The prime mover behind ASTI, the National Science Fair For Young Children, the Young Inventors Challenge and the Creative Thinking Camps is this guy here : 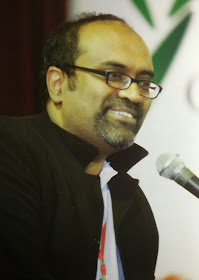 About 12 years ago Dr Yunus and some dedicated friends set out on a crusade to help Tamil schools which until that time (and even now) were seen as lacking in many facilities.

Considering the present achievements of the Tamil schools in the UPSR and in international science competitions, they have come a long way. 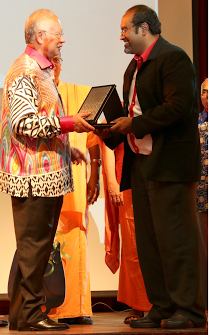 Thanks to the solid Cambridge education Dr Yunus is multi faceted and multi talented. Besides chemical engineering he has self taught himself financial planning, financial management and environmental engineering where he is a recognised expert (meaning multi national corporatioans hire him to advise them in these areas).

He did a stint in Khazanah Nasional Bhd where he helped set up a few technology based companies. However his passion is youth development and science education.

Dr Yunus is also active in NGOs. He is a member of the Asian Muslim Action Network (AMAN) based in Bangkok which has a knack for entering conflict zones and reconciling citizen groups at the ground level. An all rounder guy. 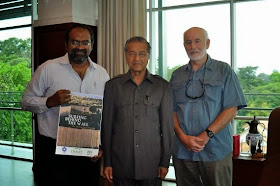 Assisting the Palestinian cause as well.

Dr Yunus is also known to the world renowned Professor Emeritus Noam Chomsky of the Massachusetts Institute Of Technology in the US.  In 2013 Professor Chomsky agreed to supervise Dr Yunus to write a book titled 'The Future of Education'.

Unfortunately the Malaysian funder (a GLC) who promised to support the project pulled out. So the book has not materialised yet.   This would have been the first collaboration between a Malaysian researcher and Prof. Noam Chomsky. Tak jadi. 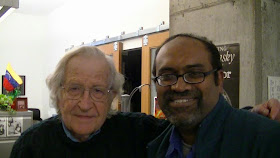 Personally I knew Dr Yunus' family from Ipoh. His late father En. Mohamed Yasin was in RTM (radio).   Scientific talent seems to run in the family. An older brother is the head of the medical school at a foreign university here. Another brother is a civil engineer whose company builds those columns (piers) for the new MRT project while a sister is a lawyer.

From a "religious" standpoint Dr Yunus is also well known among the "Sufi" people in the UK and here. Fortunately over many cups of teh tarik and discussions over the past few years he has been cured of this malady. Now he is a firm believer in the Quran.  Cambridge pun kalah ! (A pound for the Quran bro !)

The ASTI and its Science Fairs with 80,000 participants, its Young Inventors Challenge with 60 schools, training 700 teachers every year etc all cost money to run. Guess what is ASTI's budget to get all these things done?

RM42 billion? RM188 million?   Folks, remember the National Education Blueprint? That cost the taxpayer RM25 Million. And it has gone down the toilet.

Well, all of ASTI's programs are run for under RM800,000 (eight hundred thousand Ringgit). That is all. Can you bilivit ? 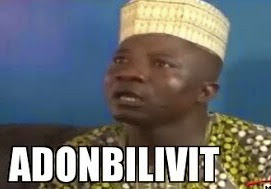 ASTI's office is an upstairs shophouse in Petaling Jaya rented for about RM1500 per month.

ASTI depends on a whole army of volunteers (too many to mention here - but syabas to all of you) who are committed to see a better future for young Malaysians, one that is based on science and modern thinking.

And the good Dr Yunus Yasin does not earn a single sen for all this effort. Only a totally committed person (or a truly dumb guy) would do all this for free - plus sacrifice so much time. Well, Dr Yunus is not a dumb guy.

Who funds their activities?  Well at this year's fundraising dinner (couple of weeks ago) the YB Minister Dr Subramaniam attended. I was there. Dr Subra made a long winded speech and basically said, 'Thank you for the dinner but we aint got no money for you tonite." 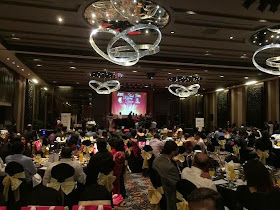 ASTI fundraising dinner could not raise any funds from the gomen

The Prime Minister's Office gave some funds ONCE, but only once. Not anymore. A bank gave RM50,000 once. Second time tak ada.

The US Embassy has stepped in to give some funds for the Young Inventors Challenge. There are also other good hearted corporations and individuals who chip in so that ASTI is able to run its programs.

Folks, with a budget of just about RM800,000 a year Dr Yunus, ASTI's Science Fairs and the Young Inventors Challenge are making scientists out of primary and secondary school kids who are winning international science contests in New York, London, Beijing and at home.

Plus the Tamil schools are setting a good example by leading the nation in science and maths and are sweeping the UPSR results.

Siapa nak tolong, tolonglah.  You can contact ASTI at

Dr Yunus may be embarrassed at some of the details in this post, but let me tell you bro, in this country if you dont stand up and shout, no one listens.

Keep up the very, very good work.  There are many other people who care.
Posted by Syed Akbar Ali
Mohd. Kamal bin Abdullah at 2:43 AM